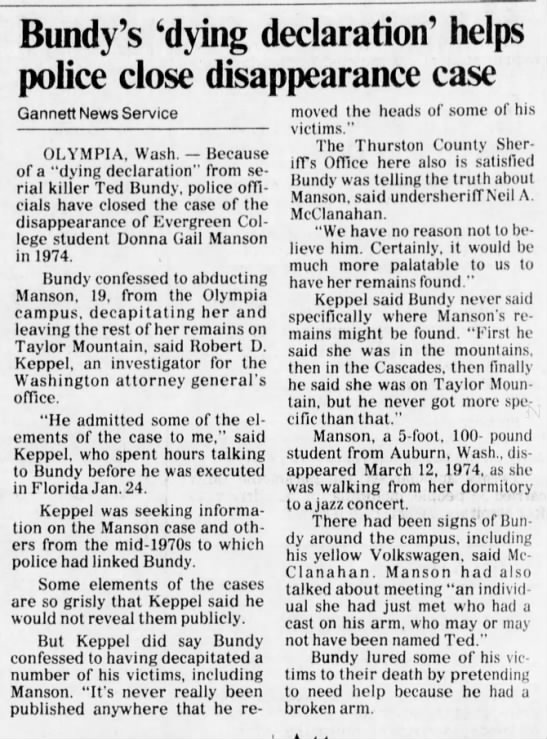 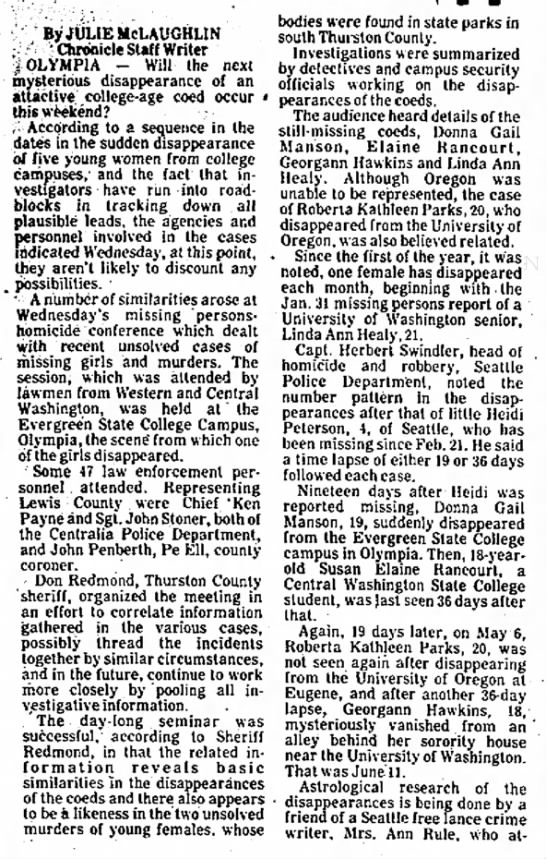 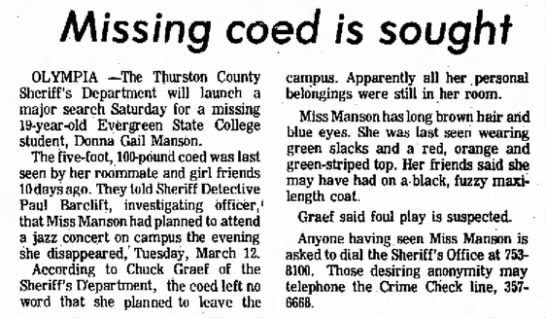 Lost skeleton could be that of '74 Bundy victim

The skeleton of one of serial killer Ted Bundy's victims - a 19-year-old college student - may have been found 20 years ago in the foothills of Mount Rainier, forensic experts say.

But confirming the identity of Donna Gail Manson might prove impossible because the Pierce County Sheriff's Department lost the remains a few years after their discovery, along with X-rays and other forensic data.Manson was last seen headed for a jazz concert on the Evergreen State College campus in Olympia on March 12, 1974. Within 10 days, the Thurston County Sheriff's Department was investigating her as a missing person.

On Aug. 29, 1978, two fishermen came upon a human skull while walking in the foothills of Mount Rainier, southwest of Eatonville, where Washington 7 crosses the Mashell River. Searchers combed the area and found more human bones, hair and a multicolored shirt, which became a key piece of evidence.

Manson reportedly was wearing a similar shirt when she was last seen.

To try to confirm the identification, Hoffman has contacted Manson's parents, Auburn residents Marie and Lyle Manson, and would like to show them photos of the clothing, which also has been lost.

In an interview with The News Tribune of Tacoma, the Mansons indicated they long ago put their daughter's memory to rest and declined to comment further. But they asked Hoffman to send a copy of the photo so they can look at it.

Bundy was executed in Florida nine years ago Saturday for killing a 12-year-old schoolgirl. Before his death, the former law-school student confessed to killing Manson, making her one of 28 known Bundy victims from Washington, Utah, Colorado and Florida.

In interviews in 1988 and 1989 with Robert Keppel, a King County detective investigating the killings, Bundy said Manson could be found "in the Cascade Mountains." The site near Eatonville could be considered in the Cascade foothills.

But in the same interviews, Bundy also said he killed Manson, took her skull to his girlfriend's house and burned it in the fireplace "down to the last ash" in "a fit of . . . paranoia and cleanliness."

Bundy never said just where the body was.

Pierce County authorities had treated the Eatonville remains as those of a possible homicide victim.

They checked with local jurisdictions, looking for a missing person who would fit the evidence. Dental X-rays were made and compared to some missing-persons reports.

But they were never compared to the dental charts of Manson.

When Pierce County detective Roy Durham described the clothing to Keppel, the King County detective was interested in the multicolored shirt, noting Manson was last seen wearing something similar.

But he "was advised that the skeletal remains did not appear to be as old as 1974," Durham wrote in a report two days after the bones were found.

Nevertheless, Keppel recommended calling a Thurston County detective who was in charge of the Manson case. But a message left with him was never returned, Hoffman said.

An investigation was revived after a Dec. 2, 1996, story in The News Tribune about three unidentified skeletons that disappeared from the property room at the sheriff's department.

Two of the skeletons were destroyed in the late 1970s and early 1980s in the Tacoma landfill, during routine purges of the property room at the sheriff's department.

Neither the Pierce County Sheriff's Department nor the Medical Examiner's Office can say what happened to the third skeleton found near Eatonville.

Officials also haven't been able to explain why the X-rays and other coroner's records related to the skeleton also are missing.

A recent check of the dental records of missing persons in the state produced eight possible identities for the Eatonville skeleton. A forensic dentist hired by the sheriff's department ruled out all but one case - that of Manson.

If the skull - or even X-rays of the teeth - were still available, a comparison of dental records probably could show conclusively whether the skeleton was Manson.